Todd McFarlane Made My Day,over 25 years ago. 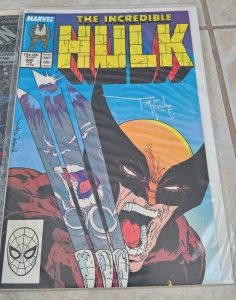 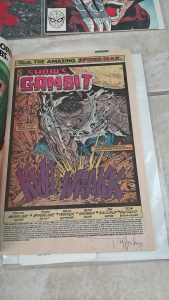 When I think back to the days of when I used to buy comic books for pure excitement I have a few great memories that really standout in my mind these many years later.  In the early years I tried to buy comic books in bulk to hopefully sell years later in a collection; before ebay, before the creation of Unrealbooks.com,  my own website, before the success of Conventions and major superhero movies.  I can remember buying a single issue of a few titles and being blown away by the artwork and just enjoying the stories.  In the late 80’s, loving comic books in this way, had me captivated with many of the artists that are still around today.  As I look back to those moments of what it truly meant to “enjoy” comic books I recall an experience which, at the time, made me feel special, but now as an adult it makes me privileged to have had this encounter.  It was the summer 1990 or 1991.   There was a Toronto Comic Convention taking place and the main guest was Todd McFarlane .  Spiderman had just been out for a few issues and I remember running around to all the local variety stores to try and pick up as many as the bagged copies of the #1 title as I could get my hands on.   I rode my bike for hours to all the store locations I could peddle to, flipping through magazine racks, hunting for those bagged copies that were still on the shelves.  Those comics had brought Spiderman to the pages like I had never seen before.  I remember talking with friends about how the webbing was drawn with more detail then other artists had drawn the entire Spiderman figure.  When it was announced that Todd McFarlane was going to be attending this Convention I knew I had to get down there to meet him, sign my favourite books and try to get him to draw me a sketch.

I recall my dad driving me downtown, dropping me off and being hours early to stand in line.  By the time the show opened a sizeable line had formed and coming early had been a good decision.  The time had come for the organizers to unlock the doors and guide us to the table where Todd would be appearing.  I remember being really excited to meet him as without the internet back then, I truly had no idea what he looked like or what to even expect.  I knew his artwork and that was about it.  Before he came to the table there were two security guys assigned to the area for crowd control.  Now here is the start to the dilemma of the story; even back then I could tell these guys were no lovers of the comic world.  Judging by their demeanor and tone they were just there because they were being paid to be and they had no appreciation for what was taking place as fans were going to be given a chance to meet their heroes. They came over to us at the front of the line and barked out something like:  “When you meet the artist he will sign one book, that is it!  No commissions allowed!  One signed book only.” I can recall looking down at all the issues I had brought with me and frantically deciding which one I would want to have signed.  As if to simply torment us, one of the security guys just keep yelling it out repeatedly as he walked the line.  Emphasizing that only one book would be signed and no commissions.  I can clearly recall that on that day I had no idea what a “commission” even was.  I had never even heard the term used and did not know what they were referring to.

Eventually Mr. McFarlane came out and the first guest approached the table.  Again, the guard came to the rest of us in line to crudely bark the one book signing rule.  Through adult eyes I know running security for shows can be demanding.  Working with kids and teenagers can be especially taxing, but no matter what, there is still a better way to deal with fans and guests at a show.  As an adult almost 25 years later I can still recall them making me feel uncomfortable, it must have been the wrong way to do the tasks they were assigned.

As I got to the table and stood in front of Todd McFarlane he asked me if I was enjoying the convention.  I had told him me and my brother had been there for hours to get in line and was excited as I was loving all of his work.  I had put down my comic on the table and was pointing out how we loved the fact that there were spiders hidden in the cover artwork, and when I spread my comics out to show him the guard came up and yelled “one signature per customer”.   At this moment Todd looks and me and shrugged as he said something along the lines of   “They only want me to sign one book for each person.  So which one do you want me to sign?”  I slid forth my copy of Spider-Man #1 and as he signed he continued to ask me some more questions and I told him what I enjoyed about the books.  I told him my favourite character was Wolverine and I loved how he drew him in the issue of the Hulk.  He hinted I may be seeing him soon in the Spiderman book and I thought that was really thrilling.  He slid the comic back to me and then said, “So which one do you want me to sign?” His face was expressionless and at first I did not know what was going on.  He repeated the questions and I just looked down and passed him my Hulk #340, he smiled and started to sign the book.  He made a comment about drawing that issue and as he passed the comic back to me he again asked, “So which one do you want me to sign?”.  I then slid over Amazing Spider-Man #328.  I remember him saying how busy the cover was and he opened it up and just signed on page one.  He then asked me what else I was holding and I showed him the oversized poster I had of #328.  I asked if he could draw me a head sketch of Wolverine in the corner.  The guard barked out “No commissions” (I still had no idea about what that term was).  Todd looked at me and said it would take too long to draw characters for everyone in line. “They wont even let me draw a spider or anything it takes up too much time.”  Even as he was saying this he signed the poster and sure enough in the corner he had drawn the spider logo we had spoken about being on all his covers.  It was such an wonderful comic book moment.  As I look back at it now, sure I did not get my Wolverine head shot, but it was memory so much more substantial.  He took an awkward situation and turned it around.  He took the time to sit there and talk with a fan and bent the rules for a moment which was more than appropriate to do so.  It was a great encounter that still stands out so many years later.  Anytime I see his work or flip though his comics that memory jumps right out of the pages of my mind and I really am thankful for the extra time Mr. McFarland spent with my younger self. 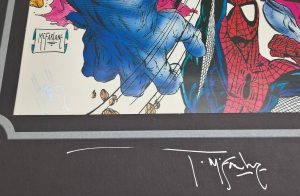 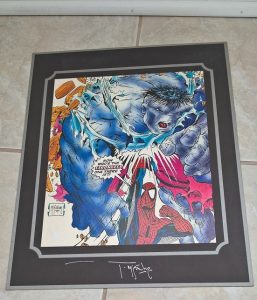 unrealbooks
Recommended Posts
All Images & Characters contained within this site are copyright and trademark their respective owners. No portion of this web site, including the images contained herein, may be reproduced without the express written permission of the appropriate copyright & trademark holder. 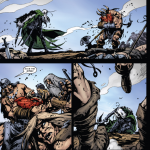