While at a local auction house, I spotted this comic box up for auction. The action description simply stated “box of comics”. I did not have the option to look through it, it was a buy as is, all or nothing type of deal. They sometimes have long white boxes of comics and those to are auctioned off as well and your not allowed to pick through them. Its a luck of the draw sort of deal. In all honesty, based on the artwork on the box I want the item for that reason alone. I liked the original comic book artwork sketch and The Captain America Iron-man Civil War image was enough for me to pick it up. I figured the comics inside would just be a bonus, even if it was filled with X-Force #1s it still be a good find.
The starting bid was just $15. As I looked at the box from behind the counter, again I was not allowed to open the box before hand, I could see it was a bit marked up on the sides where the packing stickers were ripped off. However, there was some writing on the top of the box that I had not noticed until a second glance. That one word had me convinced the $15 would be a worth while bid. Sure enough no one else put any bids on the item and the box was mine.
Once I had the box in my hands I could now take a look at it more closely. On the back of the box the same words from the top words were also written there. 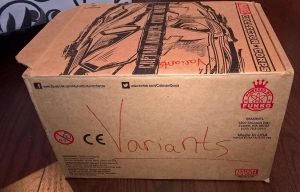 Any comic collector has to have their hopes up when you see these words. I mean 1st appearances could have been better and at least it did not say 3rd printings. So I pulled the flaps and took a look inside. There were two big bulging eyes looking right back at me and I just had to laugh. 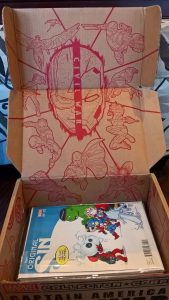 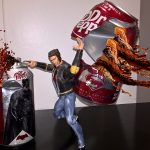 Turning a mistake into a Marvel.Blog