Aquaman VS Namor the Submariner

By unrealbooks
Posted November 27, 2015
In Uncategorized
Aquaman VS Namor the Submariner2015-11-272022-02-21https://www.unrealbooks.com/wp-content/uploads/2016/11/UnrealbooksLogo33-1.gifUnreal Bookshttps://www.unrealbooks.com/wp-content/uploads/2015/11/aqua-vs-namor.jpg200px200px
Original Aquaman Comic Art   Original Namor Comic Art
With the acquisition of some new art my son asked, who would win in a fight between Aquaman VS Submariner?
I had to sit back and really think about that one.
There are so many variables to try and actually work this battle out that it’s not as clear as one comic fan may think. There are many versions and stories for each of these characters it’s difficult to get a clear grasp of just what each one is supposed to be capable of.
My first initial thought: Submariner would take Aquaman down instantly. This was the kid in me yelling out an answer. My mind took in what I knew about these characters from my childhood first.
I grew up in the 70’s so my tv show exposure to Aquaman was Super Friends. Aquaman made funny faces on paper plates and was drawn with about five lines to show off his definition. 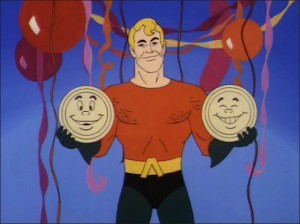 He was not as bad as we joke about today, but he was not the star of the show. He talked with the sea creatures to help out and could swim better than the rest of the team. But we seldom saw him fighting anyone. Submariner, who I could only recall from the comic pages in the 70s, was drawn with a lot more muscular definition and he was fighting villains in the comics that were a lot fiercer than anyone Aquaman was tangling with on TV.  If you put aside the TV show and just look at the comic covers as seen by the eyes of a kid in the 70’s, Aquaman was doing a lot more smiling and a much happier guy than Submariner ever was, and for some reason those images made me think he would lose in a battle against Namor if it came down to a fight. 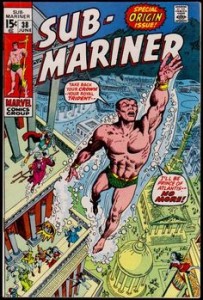 I can’t narrow it down when I first read about it, but it became associated with his nature that Namor seemed to always be cutting in on Reed Richards love interest and that seemed to make Namor a hard-nosed type of guy. Let’s face it a, bit of a jerk. That also led me to the notion of him being more of a guy who sought out trouble.
All of these things do not really justify the idea of who would win in a fight. I’m stating why I had my first emotional answer and the ideas behind it.
In my next entry I will look into what we know about these heroes today. Take in the current stats and powers. Take in some views of others and see if we can better grasp which of these heroes has what it takes to take down the other guy.
There are a ton of YouTube videos that deal with this debate and here is a good one to check out.