Turning a mistake into a Marvel.

Check out the full Youtube video here with his photos.

Out of nowhere I heard a loud crash in the basement and when we ran downstairs I found four kids standing around a partially fallen shelf and the contents of my Superhero pop cans all over the floor.  The cans that had cracked open made a contained mess.  The pop cans that were punctured sprayed the contents around the entire room. The walls, ceiling and floor were covered.  The cans were still spraying soda as we ran approached the disaster.  Dr. Pepper and Hard Lemonade EVERYWHERE.  At a first look, my ten-year-old son, who had tipped the shelf, was not physically hurt but I could see he was really sad.  I did my best to not get too upset over the broken cans.  Together we all cleaned up the mess.  It took a few hours with not much talking from parents or kids.
About ten Batman VS Superman cans were wrecked and one Deadpool can was also crushed.  When we finished cleaning up and our friends when home I asked my son what had happened.  At first he said the shelf just fell when he touched it.  I knew based on the shelf and the natural laws of physics there had to be more to the story.  Finally, after some tears he told me he and his friends wanted some playing cards and he took a chair over to the shelf.  He pressed his elbows on the shelf to get a better grip and that is when it tipped.  This whole story took some time to get out of him from as he was upset over the events that occurred.
Once I pieced together what had happened I wanted to come up with a way to let my son know not to worry and as long as he told me the truth, everything would be alright.  I wanted to reassure him that in every situation, telling his parents the truth was better than twisting the facts to get out of trouble.  I tried to explain this to him but he could not get past past the notion in his mind that I was upset over the cans.  He knows I love collecting these simple things.  While I do not have an extensive or expensive collection, the items I have set up in the basement are things I show off to my friends and his buddies (ie: cans, bottles, Lego).  I took some time to think about it and the next day I took him back down to the basement.  As we looked over the broken cans again I could see he thought it was a much bigger deal then it actually was.  In his mind he broke his daddy’s toys and had no way to fix it.  I explained to him that we could salvage the broken cans and have some fun with it.  We spent a few hours digging through his action figures and setting them up into action shots taking pictures with my phone.  We had Superman, Wolverine, Spiderman, The Flash, Doomsday, Shazam and many others set up with the cans.  I asked him to look up online different ways  to work with Photoshop to enhance these images.  He really enjoys using Photoshop and after watching a few videos he had some new ideas on how to enhance our phone images.  I sat with him for a few days working on Photoshop, sharing and talking about new ideas and figuring out to make it all happen.  We again talked about the importance of being truthful and taking ownership for when something happens.  I explained how we could turn a blunder into a positive incident if we just worked it out.  I could tell he was in a much better state of mind and was now listening to what I had to say.  Hopefully in the future he will not be as hesitant to come up with the truth when things go wrong.  It was a great moment to have and worth the cans being crushed.  It allowed us to talk and play in a way kids should with their parents.  Having kids feel they can communicate with their parents truthfully.  Knowing they can share their accomplishments along with their failures with their Parents is an important lesson to teach and I think it is a worthwhile conversation to have.  Knowing when to consequence a child and when to make it a positive learning experience is a fine line for a Parent to know but I think it worked out for us this time around.
He made a Youtube video of the first batch of his Superhero photos and hopefully soon he will have more to add.  Enjoy! 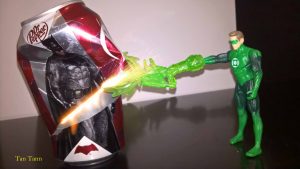 Green Lanter VS Batman Can

unrealbooks
Recommended Posts
All Images & Characters contained within this site are copyright and trademark their respective owners. No portion of this web site, including the images contained herein, may be reproduced without the express written permission of the appropriate copyright & trademark holder. 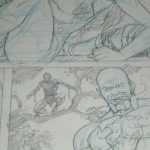